The Next Grand Minimum

One of the consequences of a Grand Minimum coupled with a Little Ice Age is the long term impact on food production. As the cool settles in and the ground freezes food-producing land becomes scarcer, food-growing seasons become shorter, and the world becomes a much more arid and less hospitable place. Food shortages and social unrest has followed previous cold periods and will again.

As I have written before climate change in America’s food basket will be one of the early indicators that the next grand minimum has arrived and the consequences are emanate.

The continental U.S. has been cooling over the last 16 years, at a rate of minus 3.8°F per century rate. 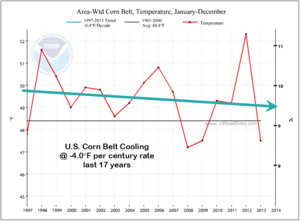 The NOAA/NCDC climate record reveals, the breadbasket areas of American have been cooling for a longer period – 17 years. The images below reflect the empirical evidence for the primary U.S. corn growing areas., which is cooling…

This entry was posted in Uncategorized. Bookmark the permalink.

Ideas and Data
News You May Not Have Heard About

A flock of Treepers seeking deep knowledge of the prime number 17.

How to Be a Stoic

an evolving guide to practical Stoicism for the 21st century

Join in our slanted and warped view of politics and world events.

rednationrising.wordpress.com/
American Renaissance
Eyre International - Bringing You The News No One Else Wants To Bring You

The Hidden Truth Behind The News

Extracts compiled independently by students of the doctor-writer's work

If The Truth Won't Do, Then Something Is Wrong!

Exploring the little known, but true history of National Socialism, Hitler and WWII, what was really behind it, and seeking truth, justice and honour for the German people

Help is not coming. Neither is permisson. - https://twitter.com/Grey_Enigma

The Voice of Americas Forgotten Heroes, Our Veterans

A Safe Place for Free Thinkers

All Politics is now Global

Where the truth is served in a bittersweet pill.

A Contrarian View of History and Events

A Traveler's Guide to Forge Of Empires

Lion of the Blogosphere
Money Jihad

A woodworking blog by Bill Rittner

A girl and her knives.

Tips from my experiences as a contest and sweepstakes fanatic

Fact, Fiction and Opinion Stirred in an Odd Pot

A Fastidious Connoisseur of Empiricism

The first years in a woodworker's career: putting down roots and setting up shop

Mostly about Sharpening for Woodworkers